Cristiano Ronaldo and his family returned to Italy earlier this week as the countdown to Serie A resumption continues.

The Juventus striker and family have returned to Italy after spending the entire lockdown period in his home town in Madeira, Portugal.

Ronaldo , partner Georgina Rodriguez and the children returned to Italy in his a private jet owned by the former Real Madrid striker after they all spent two months away.
CR7 is ready to join his team-mates as they hope the Serie A will resume any moment in a bid to win more laurels.
It was gathered that the 35-year-old wanted to return to Italy as soon as possible and now they are staying in a stunning property many describe as a haven.

The private home which is away from prying eyes on a hill, boasts of six well furnished rooms as well as quite a number of bathrooms.
It has all sorts of amenities that would keep the star striker at rest as it is equipped with a state-of-the-art gym that he and former shop assistant Georgina love to use together.
The swimming pool is top notch where the player is expected to cool down in by doing a few laps following a strenuous session lifting weights.
Hills to one side, a river to the other, the home overlooks the whole city and offers tranquillity.
He had been had been in quarantine with his partner Georgina Rodriguez and his family following the global outbreak of coronavirus pandemic.
But with his plane stuck in Spain over travel restrictions in the country, the Portuguese star had to seek alternatives to fly to Turin, Italy. 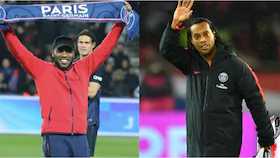 And it could be worth every penny spent – at least if its incredible features are anything to go by.
Previously named the Astra Galaxy, the jet has an impressive top speed of 560mph – meaning it can take Ronaldo an average of just six hours and 25 minutes to fly from Portugal to Italy.
The G200 is quite roomy as it can accommodate between eight to 10 passengers – enough space for Ronaldo’s family of five.
Facebook
Twitter
Linkedin
Whatsapp
Telegram
Messenger
leave your comment